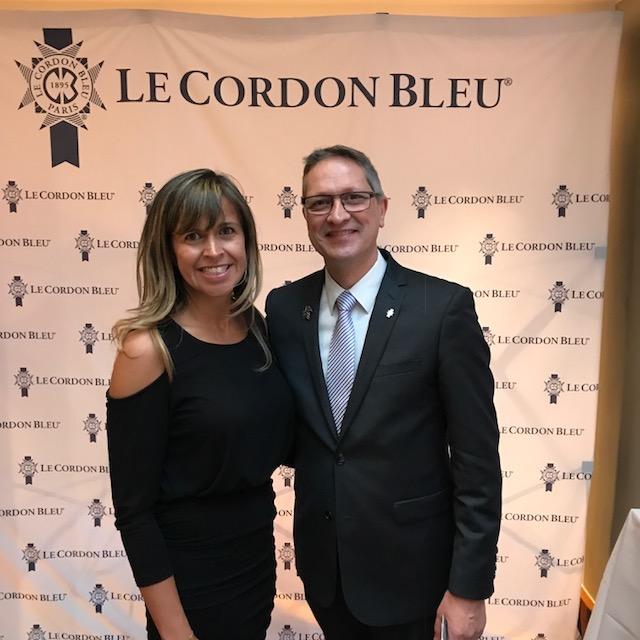 My Cordon Bleu Award tonight is a long time coming…

As you can see, I look pretty happy in this photograph. It was taken today, Monday 18 September, with my wonderful wine teacher Franck Ramage. I was one student in the first intake of a new wine diploma seven years ago at Le Cordon Bleu in Paris.

I moved to the City of Lights from the UK with my family to embark on a new life and, hopefully, eventually, a career. Not that I’d even thought of lower sugar, zero dosage champagne in those days, let alone coming up with a brand called Thomson & Scott Skinny.

Looking back, it was pretty crazy. My youngest child was a toddler, my oldest enjoying school, and my husband had a busy career in film public relations. But I knew that becoming an entrepreneur was my calling, and when I met a producer of zero dosage champagne at a Le Cordon Bleu wine tasting all my stars aligned and I knew that I’d made the right decision.

Seven years on I’m just as convinced, despite all the ups and the downs that are the crazy rollercoaster journey for any entrepreneur. I’m considered a success story by Le Cordon Bleu, and am making headway into an often-stodgy wine industry that isn’t always the first to embrace change.

So I’m taking this opportunity to raise a glass to the industry disruptors, and to advise anyone to make that first leap. It may well seem crazy to the outside world, and you are likely to question your decisions at various points in the early hours of the morning. But the buzz when your vision becomes reality and suddenly everyone wants to be doing business with you is incredible.

Go for it. Your future might not be filled with champagne and Prosecco cases like mine (literally – at one point we had 42 cases in our bedroom and had to hop over them to get out of bed) but it is likely to be every bit as exciting and fulfilling. And like me you’ll hopefully be able to declare: ‘.’