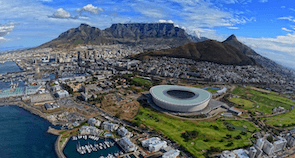 As Thomson & Scott Sales Director Shyamal Lallah admits, a business trip to South Africa is always going to be one to look forward to. Sunshine, beaches and safari in a country that became synonymous with partying when it hosted a hugely successful FIFA World Cup in 2010.

It’s a love that goes both ways. South Africa has seen a 24% growth in Prosecco sales, a phenomenal figure in a country that is famous for the quality produced in its own vineyards. Local experts put Prosecco’s success down to various factors, including its affordability compared to champagne, and its party appeal.

It’s a pleasure to have Thomson & Scott included in this focus on the growing popularity of this fizz in this part of the world – particularly as there are some incredible wines produced here.