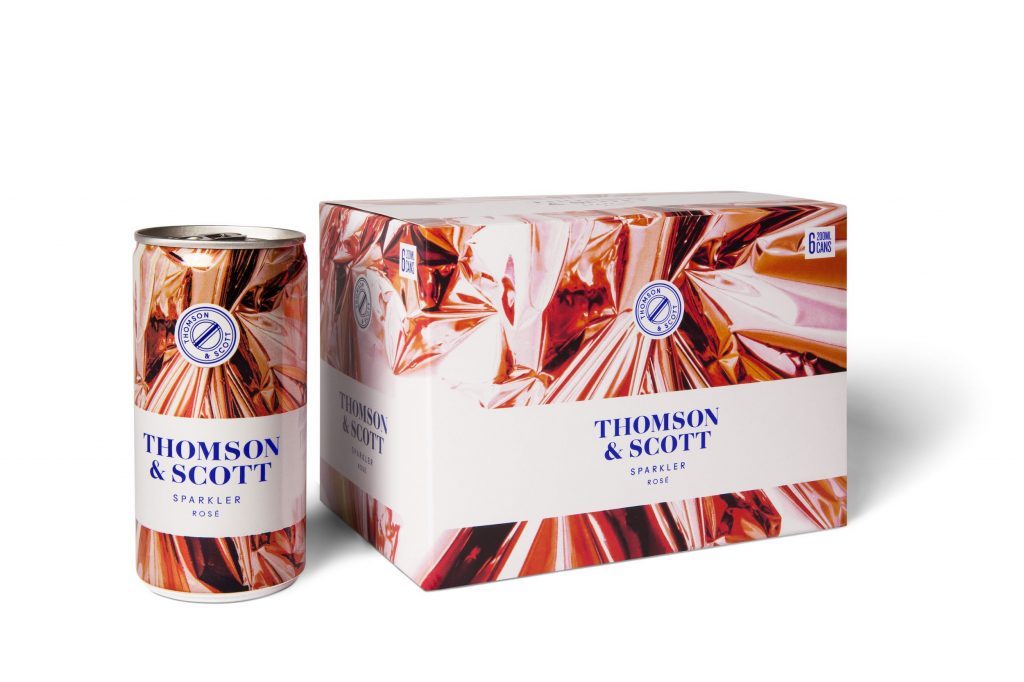 In a major feature on the emerging trend of canned wine the Metro newspaper has given our newly launched organic Sparkler Rosé cans a glowing review, calling them “lip-smacking summer pudding-in-a-can”!

It’s exciting to see how far we’ve come from what many called an insane idea to a real consumer success.

I launched Skinny Champagne back in 2013 with a wind-swept photo of me in the Daily Mail at the side of the Thames, clutching a bottle of our newly imported fizz, hair in face, trying to look like a business owner.  “Fake it ‘til you make it,” I kept saying to everyone those first few months.

I’d created a world first – convincing the Champagne Association in France to let me put the word Skinny on the front label of a Champagne bottle.  No easy task dealing with French bureaucracy.
Everyone asked – “What makes your Champagne ‘Skinny’ – it’s just wine, right?”  Wrong.  Lots of things made our bottles ‘skinny’ – they’re organic, vegan and not least of all exclude the unnecessary added sugar, pesticides, fish bladder and God knows what else.
Selfridges’s Director of Food took one look at them and screamed – “We must have them!”

I had hunted high and low across France to find the perfect bottle of bubbles.  One that would contain next to no added sugar or ‘dosage’ as the French (and pretentious wine snobs) love to call it.  I do too when I want to sound like a wine connoisseur.  I finally fell in love with a Champagne produced by a Verzy-based producer Alexandre Penet.

I told him I wanted to introduce the world to the wonders of no added sugar Champagne by calling it ‘Skinny’.  A word to which people could relate – rather than zero dosage, brut nature, non dosé or even Ultra Brut (which sounds like a Marvel character).
“People will ask what makes it skinny and I’ll be able to tell them that wine contains all kinds of hidden horrors that are not required to go on the label,” I said.

He laughed and replied in a thick French accent – “that’s just… marketing!”  The French don’t have a French word for marketing, which says a lot about how they label their wine.  They also don’t have a word for skinny.

My success in the UK grew with the launch of my next bottle – Skinny Prosecco – radio interviews, profiles in magazines and a favourable blind tasting on ITV’s This Morning where Phil smacked his lips and declared Skinny Prosecco “delicious.”

But then Trading Standards decided to try and bury us by insisting that Skinny was a nutritional claim in breach of EU regulations and that the party was over – no more promoting transparency in wine, not more media attention and growing sales.

We lost our battle with Trading Standards as we were a boot-strapped start-up and couldn’t risk taking the argument to court.  We removed Skinny from our UK labels and looked across the sea to other territories who might be less… well, mean to entrepreneurs.
The U.S. loomed large, as did South Africa and New Zealand.  The word had spread far enough for me to have had an impact on fans abroad.  I was invited to visit and since then Skinny Prosecco has taken off in other international territories including a recent explosion in Latin America of all places.  In Monterrey, Mexico they were going nuts for it on my visit, popping corks and pushing me into private jets to fly to resorts where their friends ran gorgeous hotels to get deals done.  It was a million miles away from the hard hand of UK Trading Standards.

But what about back in our tough home market?  Well, whilst I was on a fact-finding mission in California (and ironically being awarded a Winning Women Award from EY) all anyone could do was talk about wine in cans.  Cans everywhere.  And all 100% recyclable planet-saving aluminium (or aluminum as our American cousins love to confuse us by saying.)

So, I rushed back to Europe, found the perfect organic, vegan-friendly rosé frizzante form the heart of Italy and put it in a 200ml can.

What I didn’t expect was the response from women thanking me for finally giving them equality on the journey home from work!  The long-fought battle for the perfect tinny on the train had finally been given a new secret weapon.

No longer would you have to settle for a pre-mixed G&T, or a plastic glass of warm white whatever.  Now we have a top quality organic sparkling wine that contains 0.3g of sugar per 100ml and roughly 130 calories per 200ml can.

Let us take you to the future of drinking, so you’ll never have to worry what’s in your wine bottle or can again.  Sign up today and receive 10% off your first order.